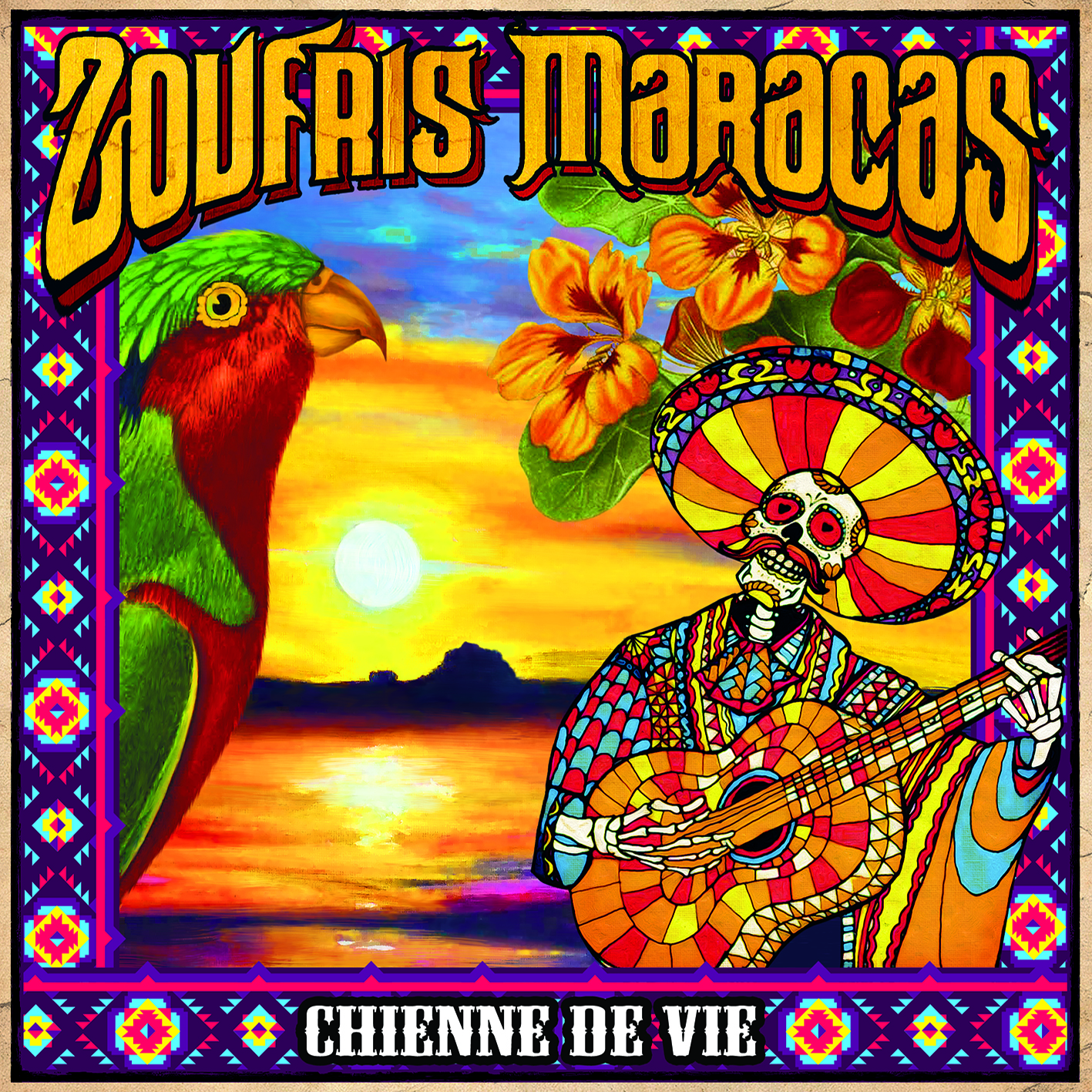 Mediocrity is the beginning of excellence! So says Vincent Sanchez – or Vin’s -, lead singer of Zoufris Maracas, in an uplifting message that instructs us to shed our inhibitions.  Unemployed, with an empty fridge and not a penny to enjoy himself, he concocted three verses using four chords to stave off boredom. “It started with a rubbish song that made me laugh; I couldn’t get it out of my head so I carried on.” His childhood friend, Vincent Allard – Micho – encouraged him to hum it once he could. “He always told me I could sing but it annoyed me because it felt too superficial for all the important things we had to say. » Brought up listening to Renaud, and extremely fond of Brel and Brassens, the young apprentice fairly took off during 2006, crafting a dozen or so beautifully radiant and finely honed songs.

After two years spent on the streets of Montpellier, Marseille, Toulouse, Lyon and Nantes asking passers-by to join Greenpeace, Vincent Sanchez had accumulated a wealth of inspiration along with a healthy dose of irritation. Armed with his environmental degree and an understanding of NGOs, he shared his knowledge about climate change and soil pollution, convinced of his ability to incite the man in the street to revolt. “My exasperation drove me to write a song. Although the words aren’t particularly combative, I like describing reactions, unmasking posturing and shams, and ridiculing reality,” elucidates the man from Sète, citing a series of stances that he bases his work on. “It’s because of music that we realise just how many of us think the same way: it enhances our ability to react.”

Before playing to packed concert venues, Zoufris Maracas plied its trade in the capital’s underground network. In 2007, the two Vincents, Sanchez and Allard, table football friends since the age of 15, spent the summer together playing in Paris’ Metro tunnels. In order to feed themselves, they busked on the streets, firstly earning a few centimes and then tens and tens of euros. “We sang really badly to begin with, but we had no choice! Gradually we got a taste for it and started to improve. We went to Montmartre every day, which meant we’d be able to eat at least.” At the end of the summer, they recorded 8 tracks with a friend – “a little demo that we just dashed off” – and their mate Youri added in some joyous trumpets to their guitar/vocals formula.

Throughout the winter, the duo shunned café terraces, opting instead for RATP trains, a habit that soon became second nature.  They sang songs with clear messages that made people laugh, despite the underground hustle and bustle, and that conveyed a poetic touch.  They were soon spotted by the underground festival organiser, Titi.  The event’s sponsor, Julio, also wanted to get behind the still-amateur Zoufris. “At least they had the nerve to do it, even though we didn’t really look like we were right for the job!”, remembers Vincent Sanchez. Along the way, they were introduced to François Causse, former drummer for Thiéfaine and Bashung, with whom they recorded the track Un Gamin, “just to see what it would be like. » This capricious band of players was then joined by some friends of friends: Mike – a fan of Django Reinhardt – on manouche guitar, and Brice – a Conservatoire student – on trumpet.

After a year spent grafting in the studio, Julio contacted music publishers Raoul Breton, renowned for their prestigious classic repertoire in the vein of Charles Aznavour and Yves Montand. Well-versed in the differences between African and French music, the publishers signed Zoufris Maracas at the beginning of 2010 before winning over the Chapter Two label in June 2011.

Professionalization has robbed none of the band’s quirkiness; they are still equally dedicated to not working, and to opening up opportunities for freedom. Chienne de vie follows their first album, Prison Dorée, evincing their ramped-up enthusiasm for the whole adventure. Whilst Vin’s and Micho roamed across West Africa in their youth with a travelling film project, it was in Mexico that they began writing this new album that now boils down to a patchwork of their explorations, with its Latino, manouche, African and even disco sounds, and themes as varied as nanotechnology, heartbreak and other hot potatoes. “What we all love is mixing things up! We like changing musical worlds, from start to finish, because each type of music produces a different emotion,” emphasises Vincent Sanchez. Coming as no surprise, then, are the contributions of two VIP guests, Winston McAnuff on “Nanotechnologie” and the percussionists from Reunion-based group Lindingo on the track “Pacifique”. “Because the situation is desperate here, we have to give hope elsewhere… Life blossoms amid diversity.”

On stage, Zoufris Maracas champion this same brand of idle spontaneity. Avoiding rehearsals as much as possible, the artists shun presentation, staging and any form of deliberate personality creation.  “People take us as they find us: our worst nightmare would be to operate in automatic mode. We sing about our emotions, which obviously vary depending on what’s happening.” Paying tribute to Algerian workers who came to France looking for work in the 1950s, Zoufris Maracas depicts a constant exile that is both overwhelming and raw. 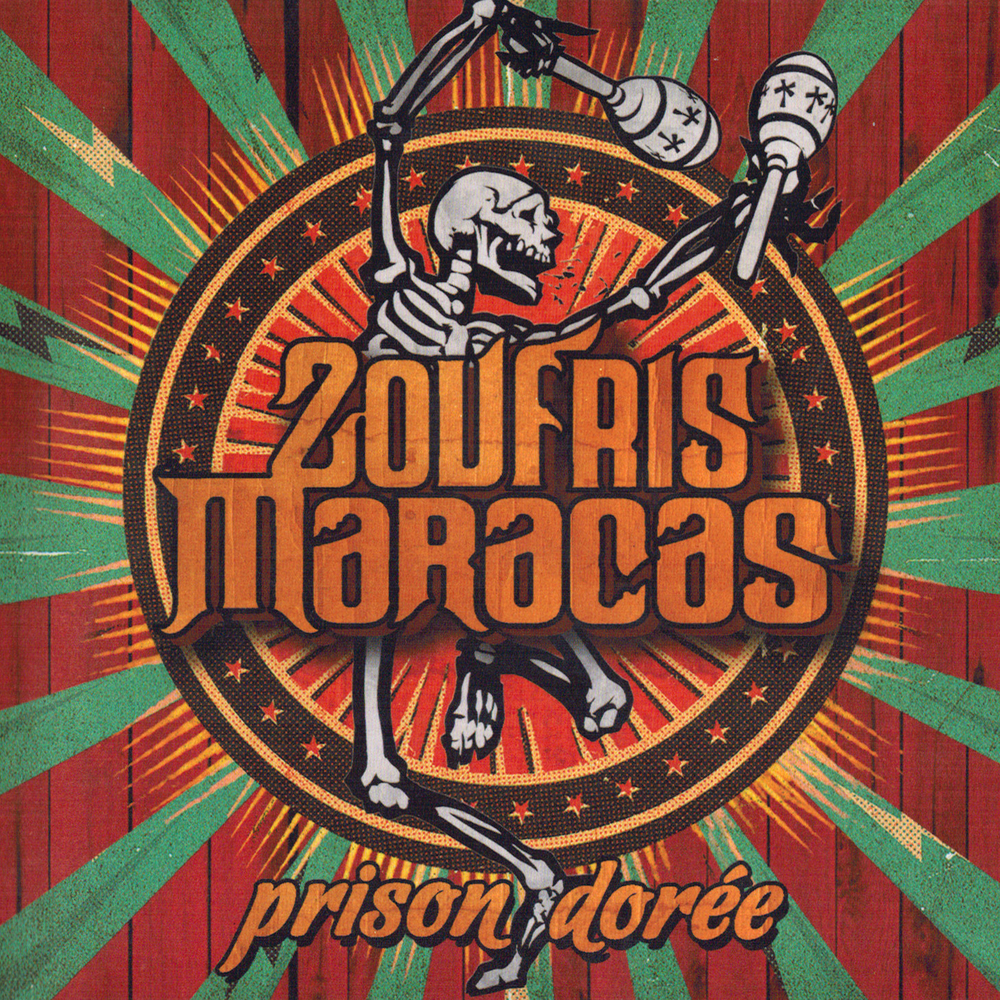